January, 2007: Photos of musicians and supporters successfully lobbying the Hawai`i State Legislature for a $4,000,000 state matching grant. Working with Scott's long-time mentor and friend, the late A.Q. McElrath and then Local #677 President Michael Largarticha, the trio was also able to secure another $350,000 in GIAs (state grants in aid). View the photos HERE.

December 22, 2006: Hawai`i Public Radio Story re The Lion King-Honolulu Symphony displacement as reported by Chad Blair. Listen to the original broadcast on an mp3 file HERE
NOTE: Chad willingly worked with us to make this story as positive and effective as possible.

October, 2003: Scott's long association with Local #677 began during yet another major crisis in management of the now defunct Honolulu Symphony Orchestra. Scott notes, "I was brought in 'late in the game' by my long-time friend, then Local #677 President Michael Largarticha. The HSO management and marketing were in a real mess and major staff changes were obviously in order. To get there, my challenge was to first convince the Musicians that they needed to appear gracious and understanding in order to buy the time required to see the needed staff changes made; for the orchestra to survive. After being forced to accept a draconian 20% cut in wages and retirement benefits, the HSO union members were understandably angry and dispirited."

Foster noted, "In the following media release, I was attempting to set a conciliatory tone that would be supportive of the truly-inept Board of Directors and Management of the Honolulu Symphony Society and indeed give the board an opportunity to regroup and work to improve the organization's dire circumstances -- without compromising the Orchestra's renowned ensemble sound." The well-received document is HERE.

Among the many international stories that resulted, the musician's positive message of unity, hope and sacrifice was picked up and broadcast to 90% of the world by Scott's friend, the late Paul Harvey during his October 25, 2003, internationally-syndicated ABC radio news broadcast. Hear the archived MP3 story HERE


Various local editorial cartoons from the period (Below). Although the Musicians and the Union worked hard to put a "pretty" face on the Honolulu Symphony Society's very public Board squabble, the local & international media understood exactly what was taking place. Many negative articles were written and TV news stories produced. Scott recalls, "In addition to the positive tone of the Musician's media releases, I commissioned the cartoon by John Pritchett (below, right) depicting the orchestra aboard a string bass adrift in in rough seas with a gathering storm. It was originaly published by the HONOLULU WEEKLY for a positive cover story. The original remains in my personal collection."

Larger images of the following cartoons are HERE 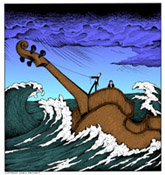 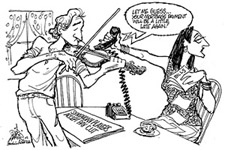 Read the February 8, 2004, story "Honolulu Symphony Musicians Celebrate Grammy Nomination Despite Loss to Tony Bennett and K.D. Lang: Inside the 2004 Grammys" By Scott Foster HERE. While Honolulu Symphony Society board members partied in Hollywood, the musicians were left behind to hold their own small gathering and await the results. 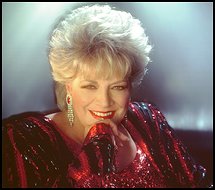 If you believe in fate, and I do, you'll understand how this album was made possible. There had to be an outside force watching over Rosemary, (it wouldn't have been the first time.) Here's what happened: The Honolulu Symphony Pops wanted to get a recording contract. In order for a record company to agree to such a large venture, they would have to hear what the recordings might sound like. Thanks to the great efforts of the Honolulu Symphony management, and the gracious consent of the orchestra members and local 67 of the AFM, permission was given to record the concerts from the 2001 season-in order to present a "sampler" to a record company. This also happened to be the year that Rosemary had asked me to book a vacation trip for her, with some family and friends-in Hawaii I had been her manager for over 20 years, and had been included in many of her special trips. This time she was combining her love of Hawaii with devotion to singing, and Rosemary agreed to sing a couple of concerts with the Big Kahuna Band and the Honolulu Symphony Pops at the end of her vacation.

She loved Hawaii-some of the happiest moments of her life were spent on these islands. She discovered paradise in the early '50s and introduced all of her children and grandchildren to Hawaii over five decades. The joy she experienced whenever she was in this incredible settling is clearly expressed in this recording. It is obvious that she loved singing with these 80 musicians, and that they simply adored her. You can hear that in every song-beginning with "Sentimental Journey"-a title which certainly described this engagement for her. "I'm Confessin" and "Just in Time" have been dedicated to individuals in the past, but this night, she is singing them intently-for her audience.

She talks about two of her favorite people-Bing Crosby and Frank Sinatra-and remembers them with song: "O? Man River," "The Singer," and "They Can't Take That Away From Me." 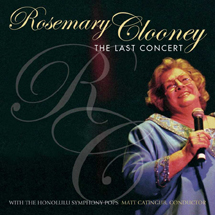 An added bonus to this recording is that we were able to capture Rosemary's dialogue. She was one of the funniest people anyone knew. She was spontaneous, and she could match wits with the best of performers. Her shows were very conversational-she enjoyed talking to her audience-and those words would reveal her ever warm and affectionate personality.

Again, it was providence that this recording should happen. Rosemary had never before recorded her friend Irving Berlin's "God Bless America". 2001 was the fateful year of 9/11- and Rosemary put the song in her show to honor the victims, to salute the heroes, and to invoke the spirit of all Americans.

America has indeed been blessed with many treasures and many people count among them-the voice and inspiration of Rosemary Clooney. This album is the result of intervention, perhaps circumstantial, perhaps divine, but in any case, will help to keep the spirit of Rosemary Clooney in our hearts and memories-forever.